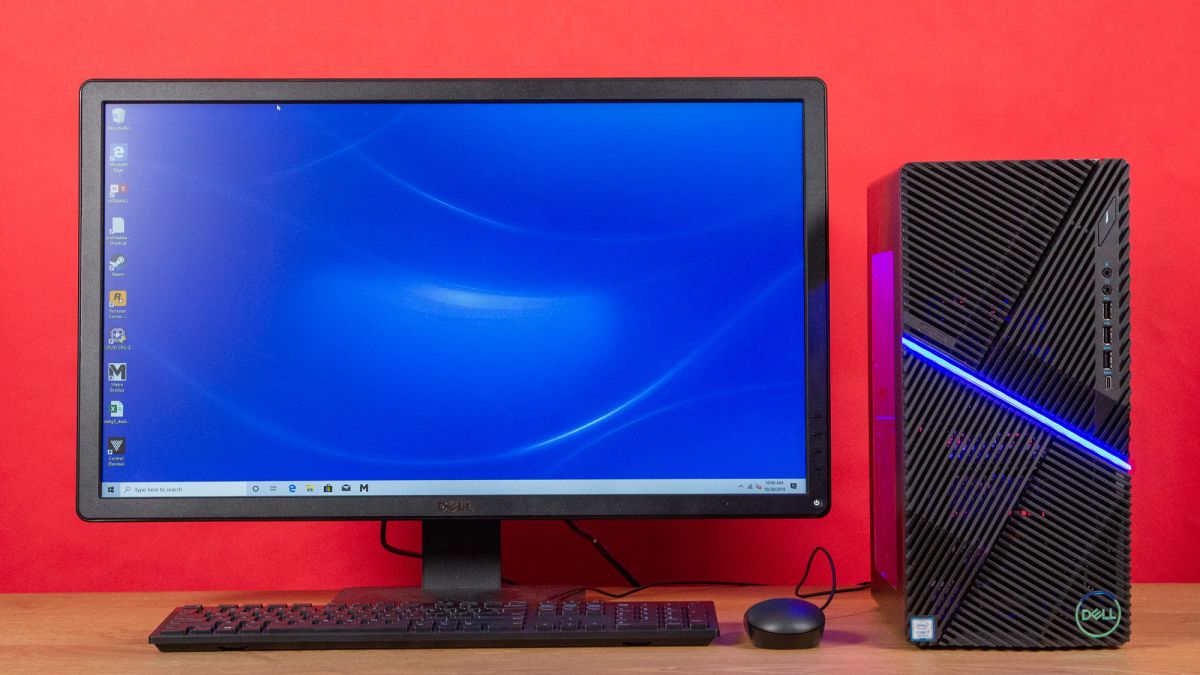 If you’re on a budget and can’t or don’t want to build a PC, there are plenty of options. Dell’s new entry-level gaming PC, the Dell G5 Gaming Desktop ($599.99 to start; $1,149.99 as tested), offers lots of easy-access ports and houses the rig in a compact mid-tower. What you’ll trade, however, is upgradeability for the future. So if you want to get the best gaming PC for you, this is a play for someone who wants to set it and forget it rather than tinker later.

The G5’s design is a bit of a mixed bag. It lacks creativity both inside and out, but it gets some points for being a small rig that could easily fit in small spaces (I say this as someone living in a tiny apartment with a larger PC).

The front is a series of gray criss-crossed lines (the rest of the chassis is black), with one line diagonally across the center that lights up blue when the machine is turned on. Dell’s logo is in blue at the very bottom of the front of the machine, and the G5 moniker is printed above the stripe. If that one part didn’t light up, I could easily see this design used for a business desktop.

On the right side of our review unit, there’s a plastic window to see into the PC. Inside, there’s blue LED lighting (there’s a $50 upcharge for this – see Configurations below). It definitely makes it feel a bit more like a gaming machine, though there isn’t a ton to look at. All of the PCBs are bare, and the window isn’t centered on the side panel.

I worry a bit about airflow in the PC case. There’s not much in the way of fans. Specifically, there are two fans. There’s one 80mm exhaust fan in the far back and another 80mm fan on what appears to be a stock cooler (Configurations with a Core i9 have a bigger cooler, Dell tells me). In theory, it’s pulling some air through the front, though you can’t really add another fan there because of the 3.5-inch HDD cage.

Perhaps my favorite part of the G5’s design is that it has a whole bunch of ports on the front. On the front there are separate headphone and microphone jacks, as well as a pair of USB 2.0 Type-A ports, a USB 3.1 Type-A port and a USB 3.1 Type-C port.

The ports on the back of the motherboard are more sparse. Up top are audio in and line out ports. Lower down are four USB 3.1 Type-A ports, an Ethernet jack and two USB 2.0 Type-A ports.

You can easily remove the left-side panel by loosening two hand-screws. The front panel with the light also comes off, but you can’t remove the back panel at all.

There were two extra RAM slots on our unit, so you could go up to 64GB of RAM, but the slots are very close together. If you have RAM with coolers or RGB lights, they may touch.

The motherboard also has x1 and x4 slots for extras, though the latter is directly under the GPU.

Beyond switching the processor (to anything that works with the H370 chipset) or the GPU, there’s not much else you can do upgrade-wise. If you want to replace the CPU fan, for instance, you would probably have to remove the entire motherboard to install a backplate.

HP has done a better job in a slightly larger chassis with its Omen Obelisk, which uses fully standardized parts, meaning you can swap them out more easily. And while it’s a pain to get the Omen Obelisk’s back panel off, at least it’s possible.

The Dell G5 we reviewed came with an Nvidia GeForce GTX 1660 graphics card. You may not play every game on its highest settings, but this graphics card will get the job done for many. I played Control on high settings, and it hovered between 40 and 50 frames per second (fps) as Jesse fought off hordes of the Hiss. The two little fans were really loud, though, in their attempt to cool the whole case.

As we don’t see too many budget pre-builts pass through our labs, we’re comparing this to an oldie, the Acer Nitro 50. That had an Intel Core i7-8700 CPU and a GTX 1060, so the G5 15 should show some generational improvements.

To stress test the G5, we ran Metro: Exodus 15 times in a loop on ultra settings. It ran at an average frame rate of 38.7 fps. The highest was a little over 39 fps on the first run, and the lowest was actually the second run at 38.6 fps. It was otherwise fairly consistent.

Our G5 came with an Intel Core i7-9700, 16GB of RAM and a 512GB PCIe-NVMe SSD, which makes it a strong productivity machine alongside gaming.

Our file transfer test was a study in PCIe-NVMe SSDs versus HDDs. The Dell G5 copied 4.97GB of files in 9 seconds, a speed of 565.5 MBps. The Nitro, by comparison, crawled at 611 MBps.

On our Handbrake test, in which computers transcode 4K videos to 1080p, it took the G5 7 minutes and 50 seconds to complete the task, showing some generation-over-generation speed.

Dell includes a keyboard and mouse in the box, but they’re definitely not gaming-grade. There’s a plastic keyboard with flat keys and a cheap-feeling wired mouse with two mouse click buttons, a scroll wheel and nothing else. If you want a true gaming keyboard or gaming mouse, you’ll have to source one on your own.

There’s a little bit of extra software on the Dell G5. Some of it’s useful, but there’s also some bloat.

Alienware Command Center, which comes with Dell’s more premium line of machines, shows CPU and GPU usage and lets you launch games from a unified library. Dell Mobile Connect lets you control your phone and send messages from your laptop; although, the Your Phone app built into Windows 10 is starting to make that unnecessary.

But Dell has also added McAfee Personal Security, Dropbox and Netflix preinstalled. That’s on top of the usual bloat in Windows 10, like Hotspot Shield Free VPN and Candy Crush.

Dell sells the G5 Gaming Desktop with a one-year warranty included. For additional payment, you can buy up to four years of premium support.

There are lots of small upgrades available. For instance, the default wireless option is Qualcomm DW1810 with Bluetooth 4.2 (which is what was in our review unit). For $25, you can get Killer Wi-Fi 6 and Bluetooth 5.0.

Additionally, the default is a 360W power supply without a clear side panel. An upgrade to a 460W adds $20, while both a 460W PSU and a windows on the right-side panel adds $50.

The Dell G5 Gaming Desktop is a compact rig that can play most games at an affordable price. It has got easily accessible ports, but a proprietary motherboard and a power supply meant for a server mean that parts beyond the RAM, CPU and GPU aren’t easily upgradeable.

This is something you buy to play PC games on out of the box, not to tinker with later. It does that job well for the price, and I have to hand it to Dell; there are a ton of configuration options.

If you are looking for something as a starting base to get into the bigger world of PC building, I suggest configuring a cheap version of the HP Omen Obelisk, which uses completely standardized parts for more easy upgrading.

But if you’re more focused on having lots of ports, this will serve you as something you can set up and play with quickly.

MORE: How To Build A PC