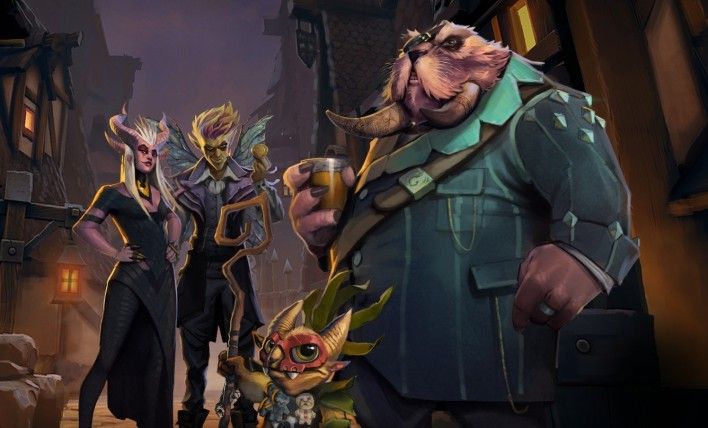 
If you’re looking for some tips and tricks for Valve’s amazing strategy battler Dota Underlords, you’re at the right place! In today’s article we will share with you all the cheats and tips for the game, in a complete strategy guide that will help you win all rounds and grab the top spot each time you battle.

Based on the popular DOTA 2 mod, Auto Chess, Dota Underlords does everything flawlessly, offering a perfect mix of strategy and depth, with some perfectly balanced units available for an outstanding overall experience.

But we’re not here to praise the game, although it deserves all the praise it can get. Instead, we’re here to check out some Dota Underlords tips and tricks. So check them out below, having in mind that this article is probably better suited to beginners wondering how to play Dota Underlords – but experienced player might find something useful as well.

1. Play the tutorial, and then bots

This is a multiplayer game and it makes sense to want to jump straight into battling other humans, but the truth is that you will learn little from the chaos that comes with online battles.

Therefore, even though you don’t like it, make sure to play the tutorial at first and go through it, then complete a few battles against bots.

This way, you will better learn the mechanics of the game, will have an idea about at least a few units that you can bring to your team and which should be purchased instead of others and overall you will have an easier time when you go online against human players.

Although the tutorial explains it all, I will go through this quickly to make sure that you understand how the battles work.

You battle other human players with one goal in mind: becoming the last one standing. In order to do so, you must win each round – and the more units you have left on the battlefield, the more damage you deal to enemy players.

Your current player level influences the number of units you can deploy – so if you are level 8, you can have 8 units on the board. The maximum level in battle is 10.

Your current level also seems to influence the quality of cards/units that you get each round, so the higher the level, the better options you will generally have.

Also, every 5 rounds, starting with round 10, there will be a Loot Round where you will gain an item that has to be equipped in order to offer its effect to a unit (more about this below).

3. Choose the right units from round 1

The first few rounds in Dota Underlords are Loot Rounds in which you gain items for your troops. These are easy and you shouldn’t have a problem cruising through them no matter what hero you choose, but go for the right one from the beginning!

In other words, try to get at least one hero during these rounds – one that you can see yourself levelling up and using in mid- to late-game rounds.

I recommend you to always start with two melee units first and only afterwards consider ranged or support units. Rarely, you will get a ranged unit that is worth getting instead of a ranged one, but almost always for the first rounds you should choose melee units – those who deal more damage instead of tanky ones.

4. How to upgrade or level up your units (aka star them up)

It took me a while to understand how to level up your units in battle, so if you have this question as well, I have the much needed answer for you.

In other words, getting those 3-star units is extremely difficult and expensive, but with a bit of planning and luck, it can be achieved.

Three star units are extremely good, so always aim to get at least one of those until mid to late game rounds in order to stand a chance of winning.

5. Levelling up vs refreshing the units offered

You only gain 1 XP at the end of each round in Dota Underlords, but you can spend 5 coins anytime to gain 4 XP. This means that, in order to level up and stay ahead of your competition, you will have to invest some gold in here.

But you can also spend gold (2 coins) to refresh the cards offered and increase your chances of getting your existing units to a higher star level.

So choosing one or another is a difficult task. However, I would recommend to only start spending on refreshing the items offered after round 10 (or later) and until then try to hoard as much gold as possible (see the tip below for the reason).

Once you have a decent amount of gold stockpiled (usually this starts at round 10 and increases exponentially afterwards), start spending it to level up and refresh the offered cards to improved your existing ones.

6. Get interest from your gold

For every 10 gold that you have at the end of a round, you earn 1 gold as interest. The maximum is 5 gold per round, so hoarding more than 50 gold pieces makes no sense.

However, if you can hold onto that gold and keep the 50 gold pieces for a few rounds, that’s perfect because it will help you a lot in the long run.

Important to know: the gold you own is calculated at the start of the round. So if you don’t really need to purchase a card before the round starts, wait for it to begin and purchase it afterwards. This way, the game will still count the gold you have spent and give you interest for it!

Alliances in this game are basically the affinity boosts that you get from pairing up the different types of units available for recruiting. There’s a ton of alliances in the game, but they offer good bonuses, so always keep an eye on them.

While some are better than the others (we’ll discuss more in depth about this at a later time), it’s good to know that you should aim for getting as many alliance bonuses as possible – and you can see how new troops would affect them when you recruit them, by looking at the information below each card.

8. Choose the right items for the job

First of all, when looking at the offered item rewards, check out their tier: the higher the number, the better the item in general.

However, some of these items will be worthless if you don’t have the required troop types in your formation. So never get a high tier item just because of its tier, if it actually gives you no advantages in the game.

Also consider the long term game: an item that gives all your Warlocks a boost might sound good early on, but later on you might not have a single warlock in your squad. So draw up a plan in your mind and try to stick to it, choosing items that will fit the description.

Also, for the items that don’t have a passive, global effect – don’t forget to actually equip them to your heroes by dragging them from the chest menu to the right over your units!

9. Work on building that perfect team

With so many units available in the game, there are tens if not hundreds of lethal combinations out there when it comes to building the perfect team. We’ll have a dedicated article to this subject, but let’s talk about it a bit until then.

When building that perfect team, you should consider a few things before anything else:

– units in your squad (you need a solid mixture of melee, damage and support units)
– Tier of the units (higher tier units are stronger at 1 star, but more difficult to get and even more difficult to star up)
– Alliances and how these units complement each other

Now, this sounds easy, but in reality, considering the things above and mixing them with the randomness of the cards you’re getting when building your team complicates everything greatly.

But try to have a plan, experiment constantly and see what works best. I would say that 1-cost units will not help you too much in the long run, so start working on 2-cost units first, then get a few rarer ones afterwards.

I would say that you’re getting the best value long term from trying to get to three stars tier 2 and tier 3 units: with 4 and above the costs and chances are too slim, while most tier 1 units are worthless, even at three stars.

I already touched the subject above, but if you’re only reading between the lines, we have to repeat it: the rarer units are weaker than the higher tier ones, but you will get more of them when you play.

So finding the right balance is key here: you will have to start with mostly tier 1 units, but try to get solid tier 2 and 3 cards ASAP as these will be easier to upgrade and offer good value in the long term.

With 4 and 5 gold cards, things will be a bit more difficult as they will start appearing more often later in the game and most likely you won’t be able to get them to 3 stars anyway.

So, for level 10, consider having one-two top tier (5) cards, one-two tier 4 cards, maximum of one tier 1 cards (if you managed to 3-star it) and the rest a mixture of tier 2 and 3 cards – and work on getting their star level up ASAP.

Out of all the units the game, the Summoning ones (like the Lycan) are extremely overpowered and you should always get them, no matter what.

Their summoned units can be stacked if you get the right items from the Loot Battles, meaning that they will constantly summon or at least summon extremely strong units. So keep an eye out for these cards and get them whenever you have the choice.

These would be, for now, our tips and tricks for Dota Underlords. This is, as I said, mostly stuff for beginners – but we’ll have more advanced articles and strategies published soon, so make sure to check back often if you need more help and advice.