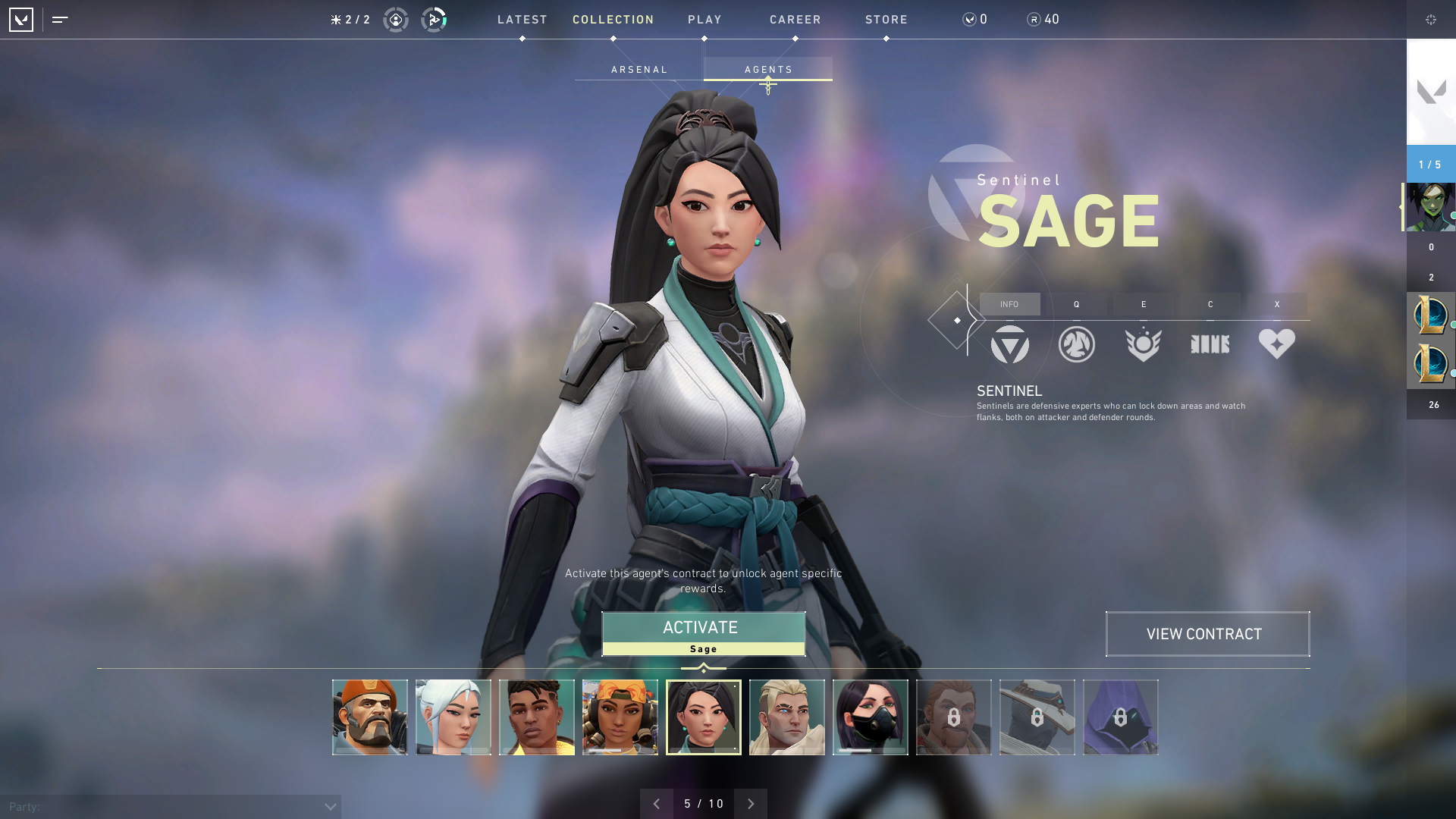 If you have played competitive FPS in the past (such as CS:GO) then you’ll likely be familiar with the core gun mechanics in Valorant. Still, Valorant has plenty of its own unique mechanics, and a lot of that comes down to Agent abilities.

In Valorant, you control characters called Agents. They each have special abilities that make them unique and give them advantages in certain combat situations.

There are four types of Agents:

There is plenty of utility in the 10 Agents currently available, so knowing their abilities and what roles they specialize in will put you in the best position to succeed.

Here is the full list of Agents and some tips for using them in combat.(Bold = Starting Agent):

Like CS:GO, each round will begin with a buy period where you can purchase weapons. Knowing what each weapon does and where they can be useful will help inform you between rounds when stocking up.

For example, the Phantom is an excellent assault rifle for mid to long range combat. Its alternate fire (default Right Mouse Button) will let you ADS for higher accuracy, at the cost of some fire rate.

The buy screen will give you very detailed specifics about the damage, fire rate, and range of the weapon your mouse is hovering over. Which brings us to the next point…

Try Out the Practice Range

There are several ways to practice the ins and outs of Valorant outside of the initial tutorial. The shooting test will let you mess with your weapon sensitivity on the fly, but the open range is access to every single tutorial Valorant has to offer in one nice hub area.

It is highly recommended you check out the Open Range before diving into a game of Valorant! The open range gives you unlimited funds to try out the weapons and Agent abilities.

This will let you figure out which weapons you do and don’t like for your playstyle. You can also try out any Agent here – even the ones you don’t have unlocked. Go nuts!

Save Your Agent Unlocks

Valorant will start you with 5 Agents: Brimstone, Jett, Phoenix, Sova, and Sage. There are two duelist to chose from (Jett and Phoenix) while the rest fall into the other 3 categories of Agents ( Brimstone – Controller, Sova – Initiator, and Sage – Sentinel). While playing the Beta, you will get 2 agent unlocks for free: One at 10,000 XP earned and one at 25,000 XP earned. Save them!

Since they give you such a variety of Agents to start with, sit back and use them for awhile before you jump right into unlocking a new one. This will give you some time to figure out which type of Agent fits how you play the game best.

Remember: When you do decide you are ready to unlock a new agent, Why not hop into the Open Range and try out their abilities before you commit. Once you unlock the Agent there is no going back!

Valorant is all about getting the right angles in gunfights. The best way to get the drop on your enemies is to hug the corners! Peaking corners will let you find the best line of sight to either drop an ability or check on an enemy.

Agents like Brimstone specialize in dominating enemy lines of sight, using smoke bombs (pictured above) to block anyone trying to peak corners. If you found a spot with a perfect line of sight, chances are the enemies know it’s there too. Always approach corners and new areas with caution, you never know what may be on the other side!

At the end of the day, Valorant is a team game. It doesn’t matter how good you do on your own. You will need everyone working together to succeed.

Obviously, the best way is always going to be with a headset and using call-outs to let your teammates know enemy positions, but the reality is that isn’t always an option. Luckily, Valorant has an excellent Ping System. Default Key locked to Z (easily changed in settings) will automatically ping the area highlighted by your crosshair. Like Apex, it will call out whatever you are looking at, so if you ping an enemy or the Spike, everyone on your team will be made aware of their location.

Use this to ping things like enemy locations, possible flanks incoming, or a dropped spike (if playing Defense). This will help your team position themselves and take the proper angles.

Rivington Bisland III said if you press the ALT key while in a match, you can see what abilities teammates have available. This includes things like Sage’s heal, so you’ll know when a helpful ability like that is ready.

Buy/Request Weapons from Your Teammates

Another sweet team-focused feature in Valorant is the ability to request guns during the buy phase and being able to purchase requested guns for teammates.

During the Buy phase, on the right side of the screen when you have the shop open, you will see the list of teammates and their current kits. If they have requested a weapon you will see it here. If you have spent a few rounds without dying or racking up kills, chances are you have some extra cash. Use that cash to purchase weapons for teammates if they need them – a kitted team is a winning team!

On the flip side, if you have spent a few rounds without kills and need a weapon because you spent what little cash you had on armor and abilities, right clicking a weapon on the buy screen will let your team know you need some help finishing your kit.

You should purchase a weapon for your teammates if requested whenever you can. You’ll never know when you might be down on your luck and karma works in mysterious ways.

One of the coolest personalization options that Valorant offers to you is the ability to customize your crosshair.

This is INCREDIBLY in depth, including the ability to change the color, opacity, width, length, and more! Take a second to change around the crosshair, or take it away completely. Whatever you want – it’s your game!

The stakes are high in Valorant; you aren’t playing Call of Duty anymore. One wrong move can lead to your untimely death, leaving your team with one less gun on the battlefield. Running at normal speed is loud, giving away your position to enemies in the area, especially to those with a good headset. Unless planned before hand, there is no reason to rush into a fight in Valorant!

Obviously there are exceptions to every rule, but more often then not taking it slow and always checking your corners will benefit you in the long run. Sometimes taking the Loss in a round, but staying alive so you can keep your equipment may be the best option for future success.

This is also where communicating comes in, If you know the general positioning of the enemy, this will give you the situational awareness to know when running is (and isn’t) an option. Don’t be afraid to ping and call out positions to your teammates, they will thank you in the long run.

There are two types of armor available for purchase between rounds in Valorant:

Armor should always be one of the first thing you buy between rounds, since armor and character abilities are the only things your teammates can’t buy for you. Which armor to buy however, depends on the situation.

Light armor is usually your best option early, it will save you money while still offering some protection. Focus on heavy armor in the later rounds, when everyone starts to be kitted out more fully.

Know When to Buy or Save

Money isn’t infinite in Valorant. Between rounds you will get cash based on your performance in the previous round. Sometimes, it may be a good idea to buy the bare minimum in order to have a more complete kit next round. Headshots are devastating no matter the weapon, so if you know you can land them, there might not always be a need to spend all your money, every round.

However, after round 12, there will be a side swap and the game will restart (other than the score). This means you will lose all your money, ability charges, and ultimate if it is ready.

USE EVERYTHING BEFORE THE END OF ROUND 12. Anything not used will be lost forever, so don’t waste it!

Like any Free to Play game, Valorant is going to have plenty of cosmetic options. Right now in the beta, some skins can be purchased through the store using real money, but there are also a few skins that can be earned through gameplay.

Remember the Free Agent Unlocks mentioned in the tips above? Well after you have unlocked both of those, the remaining 3 agents you haven’t unlocked can be earned through their Agent Contracts.

As Valorant evolves, so will its customization options. Be sure to earn whatever skins you are looking for. There is no guarantee they will be there for the full launch in summer 2020.

Even skins purchased with real money will be taken away once the beta period ends BUT Riot has confirmed in a blog post that any VP (Valorant Points) Purchased for Valorant during the beta period will be granted to your account along with a 20% bonus at launch.

For more strategies and encyclopedic information for Valorant, be sure to check back soon.